Currently, safes are opened using a numeric keypad.
If you long for the old models that were opened with a rotary switch, which was turned left and right until the correct numerical combination was achieved, you can always ride this circuit.

When the word “turn” appears on the TMS1637, turn the KY-04 rotary encoder clockwise to the first number in the combination. Wait 2 seconds until the “Good” message appears. Wait until our number comes up again, and turn left until the next combination. Repeat the process, now to the right, then to the left.
If you have entered the 4 numbers correctly (the number can be easily expanded), the message “Open” will appear and the relay will open.
When we have stolen all the jewels

, we press the central button of the KY-04, with which we will be able to close the relay.

Naturally, it is preferable that instead of directly acting on the relay that controls the lock, our ESP8266 sends an opening code via ESP-Now to another ESP8266 or ESP32 that is in charge of opening / closing the remote lock.

But that is already to improve the school grade.

I would think just a quick pulse to a simple sounder should do it.
Top

Peter, I would never put the knob and the bolt in the same box. We've seen so many thief movies bridging the connection!
That is why I suggested the idea of using ESP-NOW.

Andy, his wishes are orders: 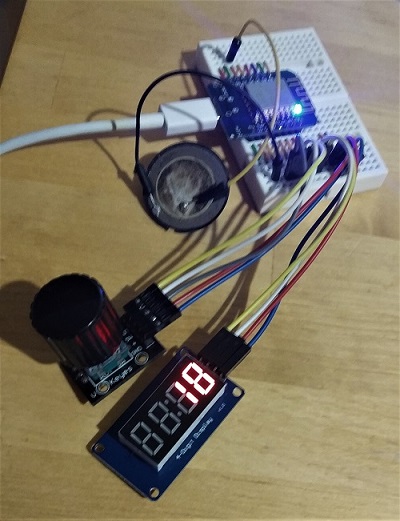 But this publication is an excuse to ask everyone what is the routine that has really worked for them to control a rotary decoder, without jumps, false shots, smoothness in the route, etc.
This one that I have been adjusting works well for me, but surely you know of a more refined one.
Please tell me.
Top

A very interesting project that evokes some interesting or perhaps confused ideas here.
Could it raise the safety level somewhat if the output does not switch a simple solenoid bolt, but an analog servo. The servo would then need at least a slightly more complex PWM control signal, the external supply of which would at least not be completely trivial. Also, the necessary angle of the servo for the opening might not be exactly the end stop, which makes overcoming with an external PWM-Signal a bit more complex - but not impossible
In the end, James Bond will break it open with his LASER watch.